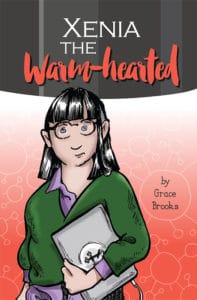 Well, there it is. We’ve come to the end of Xenia the Warm-hearted together. Having seen in the last chapter what became of Xenia and her father, CJ and his mom, and just about everyone else, we come to the last remaining person: Charlie.

The ending that nearly wasn’t

And the interesting thing about this epilogue is, it almost didn’t get written. The book originally ended with chapter 23. Detective Hastern has his last conversation with his aunt, and we’re left with some idea that Xenia will be given more mysteries to solve. Which felt sort of anticlimactic, but it was the best ending I could figure out. So I wound the book up and handed it off to my three advance readers: My priest, one proofreader and my husband Greg. My proofreader mentioned that he was really curious to know what happened to Charlie. When Greg echoed those sentiments, I started thinking I might have to come up with something.

I really wasn’t looking forward to that. The end of the book had been rough for me. Maybe it’s because I’m still basically an amateur writer, but those chapters were a strain — on my heart, on my nerves. I couldn’t imagine diving back in and putting myself in Charlie’s place. He is by far the most tragic figure. It would be too pitiful. It would hurt too much. 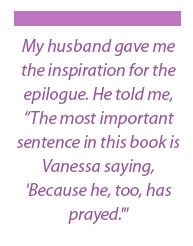 Still, when two out of three readers tell me something is missing, it’s worth considering. When one of those readers is your husband, it’s really worth considering. And I was in luck, in one way at least. As I started to entertain the idea of revisiting Charlie, I remembered something else Greg has said that struck me. When he was reading chapter 22, where Xenia is huddled out at the stable and has a short conversation with “Vanessa,” Greg looked up and said, “You know, the most important sentence in this book is Vanessa saying, ‘Because he, too, has prayed.'”

I realized that he was right. And as I said in the post on that chapter, I didn’t know I was going to write that sentence until it came out. It is the very heart of the miracle that Xenia experiences. Someone could always say that Xenia seeing her friends was just a hallucination. But they couldn’t say that about “Vanessa” telling her that Charlie prayed. God alone would know such a thing. Any vision that included that information — as long as it was true — would have to come from divine grace.

Reflecting on that one sentence gave me the central idea of the epilogue. I had been looking for some way in chapter 23 to make it plain that Charlie did take Xenia’s advice and begin reading the Gospel of Mark. But there was no easy way to fit it in. In an epilogue, though, I could revisit the whole thing.

That’s what gave me the hook I was looking for. I rewrote chapter 23 to include Xenia giving Jake a Bible to give to Charlie. I had to figure out one last code that she would devise and that Charlie could decode. (And by the way, don’t we love how smart both of them are about things like this? It turns out that not only is Xenia crazy-smart about solving riddles and puzzles, but Charlie is as well. My priest had very nice things to say when he read the epilogue, but he also commented that he would never have figured out that code. I don’t think I would’ve, either. They’re a lot easier to come up with than they are to solve. Charlie got it in mere minutes, but then, he’s had a lot of time on his hands. And apparently, he’s just good at things like this.)

So there was that to work out. But I didn’t have to wonder what she would tell him. I knew there were only three words that mattered: Because you prayed.

Supplying what was lacking 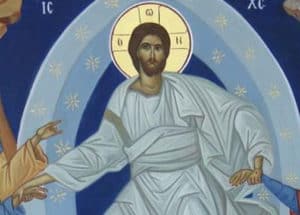 That gives Charlie the one thing that is sorely missing. Something to believe in. A realization that Xenia was right — miracles do happen. And from there, to something even more important. Xenia’s three words cause him to relive that moment, with his heart open to faith. When he does, Charlie is able to see that when he was so broken that he prayed from the heart … he wasn’t alone. Against all odds, and with no knowledge of Christian beliefs, Charlie is able to find his way to the truth that is central to the Christian faith: Jesus Christ is God and man, and He is alive. He does care what happens to us. He doesn’t leave us alone, in spite of how bad things may seem. This is the real hope that Xenia is able to give Charlie: the beginning of a relationship with the Lord Jesus Christ. 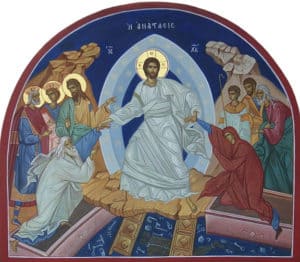 One of my priest’s other comments about the epilogue is that he liked that it gave a message of hope. I am so glad it did. I never meant for the hard realities I was trying to communicate about sinfulness and evil to end in something that felt just dark. I am always looking to convey what it feels like at those moments of truth in your life when you wake up to the presence of God. We care most about what happens when that occurs for the book’s protagonist: For Abigail, for Vanessa and now for Xenia. But always, if I get it right, that moment impacts others. Abigail’s moment saves one other person at least, but also spreads out to include her family, the ETC and even her church. Vanessa’s moment saves her brother, but also spreads out when it goes viral online. Xenia’s moment brings one very lost soul to Christ. Who knows what that may lead to?

That is our hope, and our Christian life. As this very difficult Lent comes to an end, I hope that we may always remember how good it is have these things to hold onto.

Thank you for reading along with me. I wish Catholic and Protestant friends a blessed Easter weekend, and Orthodox friends a blessed Palm Sunday, Holy Week and Pascha. And perhaps I can indulge myself and give the Paschal greeting, just a little bit early: “Christ is risen! Glorify Him!”