Of all the kinds of writing I get to do in these books, one of my favorites are the Big Reveals. I don’t know if it’s because I’m such a fan of mysteries and it’s fun to get to give the answer, or just because it’s human nature. It’s hard to keep a secret, and a lot more fun to get to blab. In any case, the Big Reveal portions almost write themselves, and there are three in this chapter. 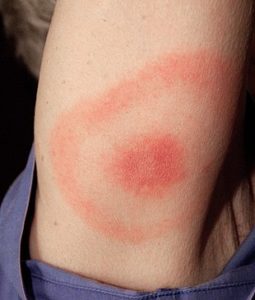 In spite of the little bit of time the girls spend hashing over the events of the last Society meeting, it’s really an accidental discovery by Maggie that makes the biggest splash. Abigail has been in a bad way since the beginning of the book, and things just kept getting worse and worse. There’s one little mark on her that everyone missed — not really surprising, given that her hair covered it — and it puts Xenia on the track immediately.

I’ve always wondered how writers on television come up with all these interesting maladies for people to have. I’m still not sure, other than them having a lot of experts sitting around that I don’t have access to. But when I was thinking what illness Abigail could have that would present a number of strange symptoms and go conveniently undiagnosed until I wanted it to, Lyme disease immediately came to mind. In their home state of Missouri, it’s very uncommon, but I’ve known two people that had very serious cases of it, and in both cases, the diagnosis was thrown off for months because the early tests came back negative. I knew that the disease made them susceptible to fatigue and achiness. One of the women, who had been an absolute hurricane of energy, found herself so weak that she had to re-order her workday so any difficult mental work came in the morning before she was too fatigued.

Horrible disease, really. And very nasty to look up on Wikipedia, where your eye is immediately assaulted by a giant photo of a deer tick. But delving into the page, I found a veritable gem of a factoid under the ‘Diagnosis’ section — it turned out that Lyme disease could easily be mistaken for a form of arthritis called JIA that affects young people and doesn’t have a known cause. (Interestingly enough, the page has been re-written and that sentence is no longer there. But judging from THIS article, it is still a concern.)

Because that was exactly the kind of thing I was looking for. Abigail getting a diagnosis of Lyme disease wouldn’t exactly seem like good news, unless she had been led to believe that she had something worse. The truth of it is that treatment for Lyme disease isn’t perfect, either. It’s lengthy and involved, and the recovery is far from speedy. But compared to having something she’d have to live with the rest of her life, Abigail is ecstatic. So are Xenia and Photini, and the chapter is off to a good start.

What was Jessam Weeks hiding? 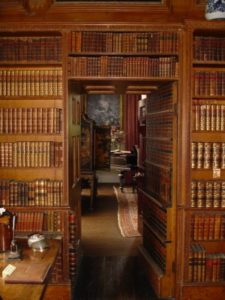 Compared to such a big discovery, the ones that Mr. Rogers and Xenia’s father make may not seem so exciting. But they’re part of the Society’s assigned mystery, and we know it will give us a clearer picture about the Weeks Treasure. Dennis Rogers figured out something that in a way seems almost obvious. The old farmhouse on the Weeks farm — which we’ve heard was built by Jessam in the 1850’s, appears to have a secret area hidden on one side. Bobbi Weeks, as a real estate agent, probably should be embarrassed that she never noticed that the dimensions of the inside don’t add up to what they should be. But a person doesn’t tend to look at schematics for an old house you grew up around. It’s only when she gives that information to the Society members that Rogers picks up on it. It means that the group will have a very interesting time of it at their next meeting, because they will get to look into an area that has been sealed up for at least 150 years. Who knows what they’ll find?

Mr. Murphy would be in a better mood about it, but he is a lot like his daughter. Xenia doesn’t like to be bested at any game, and her father is cranky that he didn’t make that discovery. The one he did make, however, probably took more work, and it answers the question that Xenia had been wondering. Seeing an article in an 1859 paper makes it obvious that Jessam was having people over who brought many slaves with them. Impossible he would do that, if he were an abolitionist, and so, he must’ve been in favor of slavery. And if so, his smuggling during the war was probably in aid of the Confederacy. Hard to imagine why his family broke off all ties because of that, but at least, it gives Xenia the information she was looking for. Go, Dad!

What is Mrs. Higg’s latest clue? 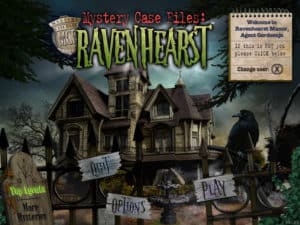 Maybe it’s not surprising that Mrs. Higg turns out to have a dramatic flair with her clues. Even though she’s a bit old for all the games that Xenia knows, it’s obvious that she enjoyed the one that she heard the young people talking about. It’s a “classic” hidden object game (HOG) called Ravensheart, and when Xenia sends off the selfie she was asked for, she gets an email back with two attached files. The first is a printout of one of the scenes from the game, and the other is locked with a password.

I won’t go through the elaborate reasoning that leads Xenia to the answer. As I said, these portions write themselves; I don’t think I could add anything that would make it more interesting. (At least to me.) 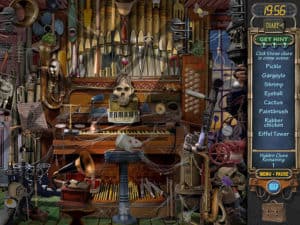 Perhaps the only tidbit I can offer, for what it’s worth, is that like so many references to games in this book, this one is a kind of inside joke. Hidden object games are exactly the way I described them — full of interesting but crowded scenes where you have to click on different items. And generally held in low regard by younger gamers, who prefer things that are more fast-paced and less “Victorian.”

Like Mrs. Higg though, I love them. And one of my favorites was a series starting in late 2006 called “Ravenhearst.” Not too hard to see how that became “Ravensheart.” I didn’t even have to lose any letters — just move them around a little. I loved coming up with this interesting little mystery for Xenia to figure out. She’ll have to stay on her toes, though. The mysteries only get harder from here on out.