The last two chapters saw some shocking developments — most significantly, Abigail’s fall and the hospital visit afterwards. As we catch up to Xenia in chapter 12, we find that all of that has taken a toll.

In the two days since Abigail’s fall, that leaden sorrow had persisted in spite of all her efforts to alleviate it. Talking with Maggie and Photini hadn’t helped, and neither had reading or watching videos or playing computer games. Weeding the garden had actually provided some temporary relief — she pulled and ripped at the dandelions and bindweed with a vicious intensity — but to her horror, she found herself suddenly crying helplessly and had to retreat to her room until the distressing episode had passed. (page 185)

This touches on an element that I haven’t mentioned here so far — the increasing sense that something has sort of gone wrong. There have been mentions of it — the girls having having bad dreams … Abigail’s musing back in chapter three that things just feel wrong somehow …

Xenia, who isn’t very comfortable expressing emotion, is starting to feel the weight of this. But she is determined, still, to continue following through on her mission alone. She didn’t tell anyone about the intriguing little task that Mrs. Higg gave her to do. It won’t be easy. Xenia will have to convince two very difficult young Society members into parting — albeit briefly — with their most prized possessions.

And by the end of the meeting, we know how that went. CJ was willing to be helpful — maybe a little too willing. But Sharleen is delighted have a reason to be obnoxious to Xenia. So that’s that.

The evening would be a total loss, if it weren’t for an interesting discussion regarding Christian beliefs. Not that things get off to a promising start:

“And what does that get you?”

It was Xenia’s turn to be puzzled. After trying to think of a good answer, she admitted, “I don’t know if it gets me anything. It’s a way to help us remember. Like, we fast on Friday to remember the crucifixion — to think about that. We fast on Wednesdays to remember Christ’s betrayal.” (page 200) 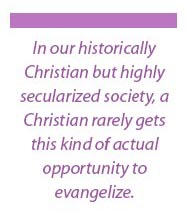 That exchange is almost verbatim one that I had with a non-Christian. At the point I offered the above explanation, the conversation came to an abrupt end, which is what usually happens. That’s certainly what Xenia experiences with CJ and Shar, who have no interest in encouraging her on the topic. It’s only Charlie, who is so thoroughly unschooled that he is actually curious, who continues asking simple questions. Maybe we can all be jealous of this kind of opportunity. In our historically Christian but highly secularized society, a Christian rarely gets this kind of actual opportunity to evangelize. Maybe it’s just as well after all that Xenia has been trying to study up a bit.

So she would have that small success to cling to, in any case. But there isn’t much time to enjoy it. Before she has even made it home, Xenia gets another unwelcome shock — her old friend Jason tried to set off pipe bombs at a shopping center.

Numbly, she had tried reaching Jason through texts and social media, but there was no response. When her father saw her do it for the third time, he told her that Jason wouldn’t be able to respond, since he must’ve been arrested. (Arrested! In prison! I can’t believe this.) She asked her father if he thought she’d ever talk with Jason again. He shook his head and said he didn’t know.

“But definitely not for a long time. Why? What would you say to him?”

It’s telling that Xenia, who seems to be so uncaring about others, immediately wants to reach out to someone that most people would want nothing to do with. There is an aspect of her personality that may not be readily apparent. She is, to many people, an oddball. As such, she is more willing to make herself accessible and available to those that others judge. And when things have gone badly, she feels an urgent need to communicate with the disenfranchised. This isn’t the last time we’ll see this tendency in her, which is something close to real warm-heartedness.

Still, her inclination is basically wrong-headed. As her father points out, she won’t get the satisfaction of speaking to Jason, even if she knew what she would say to him.

Thank goodness she has Fr. Andrew to talk to.

“I’m not sure you should try,” Fr. Andrew replied quietly. “Most of us couldn’t possibly understand this.” (page 210) 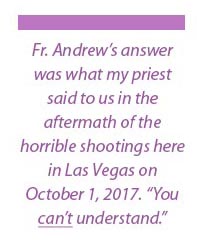 That response, by the way, was what my priest said to us in the aftermath of the horrible shootings here in Las Vegas on October 1, 2017. I liked it and tucked it away. After these things happen, we always want to feel like we can figure them out somehow. We never really can.

This episode with Jason is the first sign in this book that I am not just talking about Xenia’s social awkwardness. There is something brewing that will get very intense, and even frightening.

This fact, and Jason’s attempt at domestic terrorism, are two things that caused me to begin giving parents a kind of warning about this book. We’re not in Queen Abigail‘s territory anymore, or even Vanessa the Wonderworker.

With every successive book, the girls grow up, and the problems they face get grittier and more realistic. I am sorry for that — part of me would’ve loved to leave them all in the blissful days of 10-12 years old. But it seemed like part of the reality of junior high students these days. In talking with Sunday school students this age, it was obvious they were aware of a lot of “dark matter” their parents probably didn’t know about. Not only profane language, but the disastrous choices other young people make. And really, how could they not know? You’d have to live in a box. Never be around others, or turn on a television set … and certainly not access the internet.

It’s such a shame that such a powerful tool as the internet can be put to such a terrible use, but that seems like the lot of fallen humanity. And it’s this fallenness that Xenia is coming into contact with. This is really the problem behind Xenia’s problem. It’s all very well to set about to meet more people and have better relationships. But encountering people honestly means coming to grips with who we really are.

“… But unfortunately, there are definitely other Jasons in the world. There always will be. The ugly side of human nature is always lurking in the shadows. You’ve been hearing about good and evil your whole life. But it’s one thing to hear about it, and another thing to come this close to it and feel its impact. I wish I could have shielded you from that experience until you had gotten older. I know your parents wanted that as well. But it seems to get harder and harder all the time.” (pages 212-213)

An unhappy, but then happy ending

That gives Xenia a lot to think about. And that may be the reason that she trips up, talking with Abigail after she has left Fr. Andrew. It turns out that her friend has gotten some bad news of her own — a very sobering diagnosis of her condition. The idea that Abigail might have an untreatable form of juvenile arthritis is something she has been struggling with, and Xenia doesn’t make things any easier by being typically insensitive.

In the end, though, they patch things up. And something good comes of it. Getting to talk with Abigail — getting her take on the times that seem “out of alignment” — finally enables Xenia to get over her stubborn insistence that she has to do everything herself. She is finally ready to let the ETC help her. And not a moment too soon!

I hope that this moment has the feeling for the reader of a kind of breakthrough, of something that needed to happen in order for things to really begin to work out. In fact, that’s exactly what it is. The pace continues picking up from this point, and most chapters include action on multiple fronts.

Quick update on my health

I continue to have a lot of troubling symptoms I’m working through, and I still don’t know the results of my test for coronavirus. Yesterday, the breathing problems were bad enough that we went back to an urgent care center, and a chest x-ray showed that I had some pneumonia. I’ve been given an inhaler to use, and some stronger antibiotics. They seem to be working, but I’m still a long way from being my old self, so prayers would definitely be appreciated.

Chapter 16 — in which, much is revealed — and 17 — in which a conversation with Charlie takes an unexpected turn