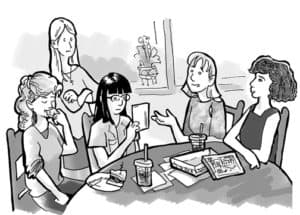 In chapter 6 of Xenia the Warm-hearted, we finally get to see the group that Xenia and her father were drafted into. The so-called Historical Sleuthing Society turns out to be a gang of amateur sleuth historians, picked at random from the irrepressible Mrs. Felicity Higg.

“Most of you don’t know each other, though I hope you’ve had a little chance to get acquainted. But you all have one thing in common — me.”

She tittered again and said hastily, “I see some concerned faces, so I better hurry up and assure you that you’re not here for the Felicity Higg Admiration Society — ”

“Which meets Wednesday,” Jake called out.

“Which meets Wednesday,” she parroted and then, because there were some confused expressions, added, “That’s a joke.” (page 90)

I just love Mrs. Higg. We met her in “The Mystery of the 70” in A Year of Every Tuesday. She’s a sort of 50-something fusion of Mary Poppins and Pippi Longstocking. And a guilty pleasure for me, since she’s the type of oldster I would love to be — unfailingly cheerful, unflappable and energetic. Gracious in an old-fashioned way, without being a fuddy-duddy. Willing to appear the total ditz, but smarter than most people realize.

As for her Society, who knows? We can tell from the conversation Mrs. Higg has afterward with her nephew that she’s not telling people the whole truth about it. And in turn, Jake tells her that there is some criminal activity brewing that he has come to investigate. It goes without saying that we will find out more about that in time, but for now, we begin to get the feeling that — as Sherlock Holmes told Watson — “the game is afoot!”

And how about Xenia? Well, she didn’t have an opportunity to use any of that research she had been doing. The only interaction she had was with one surly teenager named Charlie, who was so unpleasant and hostile that it was almost bizarre. That appears to be more his fault than hers, and she brushes it off easily — an ability of Xenia’s I am jealous of, by the way. But it does take a toll.

Contemplative times: the greenhouse and church 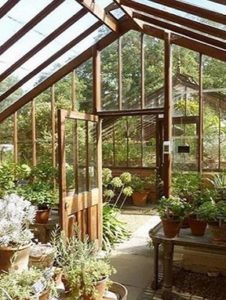 So how does Xenia respond to a disappointment? Someone else might go into a funk over it, but Xenia isn’t like that. She doubles down on the idea of research. Her father has errands to run at the restaurant owned by the church, and she takes the opportunity to tag along and hang out in its greenhouse. By the time Vanessa and her brother Noah find her, she has dived into printouts and written notes, besides listening to a podcast. She is able to share a little about her patron saint, when Noah gets curious. But Xenia expresses some frustration to Vanessa about her plan of action:

“This research is helpful, in a way,” she said. “But I don’t find very much about how [to be a better person.] Everybody is telling me that I need to connect with people more, but no one tells me how. I feel like I must be missing something.”  (page 105)

Laying the page down in frustration, Xenia said, “My faith does help. But honestly, I don’t really feel like any of this is working. I mean, it’s helping me. It makes me feel good to do these things, and it’s good for my soul and everything. I get that. But it’s as if all of that is in its own world, and then, meanwhile, there’s the real world. And in the real world, I can’t get anybody to listen to me.” (page 106)

All of this culminates in another time of reflection a few days later. She had a difficult time of it on Sunday morning, first finding it hard to concentrate during the service and then being unable to get the ETC together at coffee hour. Feeling dispirited, she goes off to sit in church, and it’s here that we find out for the first time that Xenia has some other issues that she’s struggling with.

But then, do I really have that much faith, after all?

She shifted in her seat, knotting her hands together unhappily. This was something she never spoke of, not even to her priest. She wondered about it sometimes, though. …

‘I can do all things through Christ, Who strengthens me.’

Strengthens me for what, though?

It was all very well to have done so much research that Bible verses and saints’ quotes came back to her at quiet times. That was comforting. But when would the good words find their way into the busy, noisy world that needed them so badly? When would the journey she was on take her past her own glaringly obvious flaws, and past mere sayings? (pages 114, 115)

As often happens, my character is channeling the questions I ask myself, on a depressingly regular basis. As a convert to Orthodoxy, I am all too aware how easy it is to dive into the inspiring words of Church fathers and other luminaries and mistake that kind of spiritual refreshment for true piety. There are volumes and volumes of poetry, theology, spiritual sayings, hagiographies, hymnology, Biblical exegesis … a person could pack a library with them all, and even read them enough to have portions memorized. These days, you could also listen to audiobooks and podcasts for days on end. But what does all of that matter, if you are not putting any of those good words into practice? They become a distraction dressed up as something commendable and pious.

That’s why Xenia has to get some course-correction from Fr. Andrew. My little bit of irony is that he doesn’t need a lot of words. It may be one of his shortest exchanges ever. Four words: Find out by doing.

This short phrase marks a break and a change. Xenia had been approaching her problem in a strictly intellectual way, because that was what was most comfortable to her, and didn’t cost her anything. But if you want to get to know people and truly “love your brother as yourself,” you don’t get to play it that safe. She has to venture outside her comfort zone. With every successive encounter, she begins to allow herself to care about these virtual strangers. It would be lovely if people always responded well when you do that, but when human beings are involved, results are far from predictable. We’ll find out how it works for her as the book unfolds.

Monday: Chapter 8 & 9 — The Society’s next meeting turns out to be full of surprises