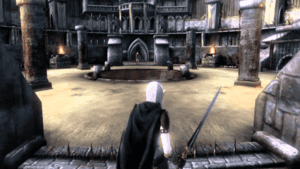 In chapter 2 of Xenia the Warm-hearted, the topic of computer games comes up. Xenia’s father is a little opinionated on the matter. Intent of making his daughter see the error of her ways, he lays into one of her favorite games:

“Basically it’s a medieval war game, rated for adults. What do you even see in something like that?” …

“It teaches me how to compete.”

“That’s what sports is for!”

Xenia is definitely one of those statistics. From the first time we met her in Queen Abigail the Wise, we’ve known that she was rarely comfortable without some kind of screen in front of her. Can that much virtual escapism possibly be healthy? What would it have done to my formative years if I had been able to retreat into that kind of activity for hours and hours every day?

But then, am I that sure that I didn’t? Consider this scene from chapter five, when Xenia and her father are enjoying a quiet evening at home. She talks affectionately about a game she likes, and her father’s disapproval boils over:

“I just can’t understand why someone would waste so much of their life staring at a screen,” he said darkly.

Xenia glanced over at the monitor, feeling abashed. She found the action both engaging and relaxing, but apparently, not everyone saw it that way. “Grandma Claire said that, too,” she recalled sadly.

“She was right,” Mr. Murphy grunted, rising to return to the sofa. But then he paused and said, half-turning, “Your grandmother talked to you about computer games?”

“No. She was talking about you and Uncle Ted. She said she was always trying to get you guys away from the TV set.”

Mr. Murphy fell silent, struck by the reply. Over to his left, he could see that his program had resumed. He had watched this episode so many times that he knew what everyone was saying, even with the sound turned down. With a twinge of guilt, he turned off the set and tossed the remote onto the loveseat. (page 76)

That’s my guilt talking there. I notice that a lot of people my age have an easy disdain for computer gaming, but don’t think twice about watching television for hours every night. My parents ragged me about spending too much time in front of the “boob tube,” and they were right. But in the end, I note that I finished my schooling, got a job, got married and have generally had a life. Isn’t it possible to keep these things in perspective? Or at least not give in to some easy hypocrisy?

Especially since there are some genuinely good things — in my humble opinion, at least — about playing computer games. This is the question I go back and forth on, and so I tried to cover both sides of the issue in the book. Besides giving me a platform to present my concerns, Xenia the Warm-hearted also gave me an opportunity to express a little of what I’ve loved about the games.

Running and jumping through the pixels 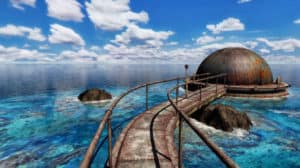 Screenshot from the sequel to Myst, called Riven.

For one thing, they can be quite beautiful. That doesn’t apply to all, of course — if your kid is into Grand Theft Auto, then beauty may not be much of a consideration (though the graphics are still impressive). But there was a golden age of computer games that started with the breathtaking world of Myst and continued into the expansive gameworld of Oblivion (which in the book is called Forgetfulness). These are virtual places, of course. But that’s why a person is sometimes liberated to just explore them completely, in a way that the real world doesn’t make easy to do. And the freedom from physical laws doesn’t hurt, either. HERE is an example — a video capture of someone jumping their avatar from one end of the gameworld to the other. This is a little of what Xenia shares with her father, and it’s another of the kinds of moments they can begin to have together once each of them has drawn back a little from their respective screens.

Finally, he is able to state his objection in simple terms, without the haranguing that he has been prone to, and it prompts Xenia to actually answer him. This is one of the best sharing times they have. It’s another of my favorites — I seem to have a lot. And readers will want to tuck it away for now. Just like one of the little clues in the games I love, it comes in handy later on.

She hesitated, gathering her thoughts. I get so much out of gaming. What’s the best way to explain that to him?

“I would like to be a hero,” she said quietly. “You can be a hero in a game. How could I ever do it real life? As soon as I turn off the game, I’m just Xenia again.”

Her father felt torn between frustration and fatherly affection. “But just-Xenia is what you’re supposed to be. I like just-Xenia. She’s real. These games aren’t.”

She nodded numbly, and they both looked at the floor.

“Yes,” she answered, very glad that Randy and Amos weren’t within earshot.

“So did I,” he said with a wry smile. “I read a lot of comic books when I was your age, and that was what I wanted, too. Your grandmother hated comic books even more than television, I think.”

They shared a smile over that.