In chapter one of Xenia the Warm-hearted, we find that she is playing a computer game that gives her friend Photini more and more cause for alarm. It’s a empire-building simulation game, played out online with real people from around the world. Which wouldn’t be so bad, if the other players weren’t (a) also simulating medieval warfare (with dragons and laser cannons thrown in just to spice things up), and (b) rabid enough about the game to verbally assault their opponents, in the coarsest, most insulting language they can think of. Xenia has a nifty game mod that substitutes other words in for profanity. But it becomes obvious to Photini — as it is, in time, to Xenia’s father — that the game is not intended for a young audience.

Just a little window into the interesting world of computer games and all the pluses and minuses.

‘Beware of my pants!’ 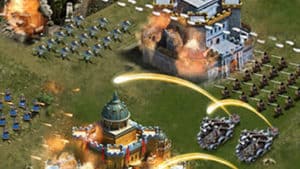 A fun benefit to Xenia’s character for me is that she gives me a chance to delve into my interest in good mysteries and good computer games. I’m a fan of both — which makes me a bit of an oddity among Christians my age — and have loved getting a chance in the earlier books to share what makes them compelling and entertaining for me. But I wanted to go a little further than that in Xenia’s book.

The game she’s playing in chapter one is a great place to start. It is based on an experience I had, and one that gave me pause about what games are available and what immersion in them could mean. The real game is called Clash of Kings, (quick trailer HERE) and it was an app that came already installed on a new smart phone I purchased. I eventually became curious and opened it up, and the scenario I give in chapter one isn’t too far off from what the gameplay is actually like.

“Oh, sorry. My fortress is under attack. But that’s okay. I’m fully shielded — nothing bad will happen.”

“What fortress? All the graphics are so small in this game I can’t even tell what I’m looking at. And there are all these different numbers and menus and stuff. Everything is happening at the same time — it’s crazy. …  Are you telling me there are other kids playing this, for real, right now?”

“The game is in real time, yes,” Xenia nodded, shifting in her chair. … “See? This is my fortress here, and here are all kinds of different stats I’ve got — the size of my army, the amount in my treasury, my kill number — ”

“How many enemies I’ve killed.”

“Yes, enemies. Other players who attack you or the ones you attack. And then, this number is how many in my army have gotten captured or killed.” (pages 20-21)

On the plus side, you get the interesting fun of trying to develop up your own little fortress, with its army and university and farming … not to mention magic and dragons, because what medieval game would ever leave those out? You are expected to join an alliance, and together, you all compete for dominance within your kingdom. The competition is fierce, and the game is being played by players from around the world. There is one chat window within your alliance, and another to let you talk to fellow players throughout the kingdom. Google Translate allows players to understand each other (sort of), and the gameplay can all be very sporting.

That’s on the plus side.

On the minus … well, there are a number of things:

With all of that, my time with this particular game was short-lived. And I offer it now a little bit as a cautionary tale for parents. As I said, this game came already installed on my smart phone. I found it all rather shocking, and I don’t think I’m that easy to shock.

That may make the world of gamers and gaming seem rather pathetic and repugnant. But I didn’t mean to start out with this kind of example and leave things at that. I think there’s a lot more to gaming culture than that. I suppose I just wanted to make it clear that it is certainly one factor. And it may not be one that parents quite understand.

So does that mean we should have total block on computer gaming? Not necessarily. I get into that more in chapter two and again in chapter five, so I’ll revisit the topic in the next couple weeks.

For now, it’s on to chapter two and three, and I’ll post about those on Friday.