It’s so difficult to watch your kids grow up, isn’t it? It turned out to be just that hard for me to let my characters get older with every book. Much as I would’ve liked to keep them at that cute 10 to 11 year old stage, I always knew that I would have to let the girls enter the challenging years of adolescence.

Ugh. For me, these were not good times. Being a military kid, I was often showing up at a new school, sometimes in a new state. That hadn’t seemed like a big impediment until seventh grade, when all the kids suddenly seemed to be trying to score points in a power game that I didn’t know we were playing.

I didn’t want to put the ETC girls through all that – maybe that’s why I ended up making Vanessa the only one who is in public school at this age. As we already know, she’s a tough person. In describing her dynamic in the awful popularity contest of junior high, I was engaging in some wishful thinking – I wish I had had the circumstances and the courage to be a friend to fellow sufferers and rescue them from bullies and creeps.

Vanessa was lucky enough not to have to depend on people like Erin to get by socially. She was far from being one of the popular set at Dewey, but she had assembled her own group of friends and they got by. Vanessa had a habit of reaching out to the kids that looked like they needed a friend. Some were new in school, some were just awkward or quirky. They didn’t always have a lot in common, but Vanessa was able to enforce her own kind of moral code, which only had one rule: you couldn’t be any meaner or stupider than you absolutely had to be. It wasn’t written down anywhere, and no one ever said it out loud. But that was the rule.

It wasn’t much, really, but it was enough to get Vanessa and her crowd labeled as weirdos.

And into this world sails … Xenia, oblivious as ever to social nuances. She is too fixated on the problem of the less-than-ideal ETC photos and couldn’t rest until she found Vanessa and conspired with her to bring it up at their next meeting. It’s a typically odd Xenia mission, but coming into the rough environment of Vanessa’s school, Xenia takes some collateral damage from a random remark of Erin’s – she hears herself called “aspie.” 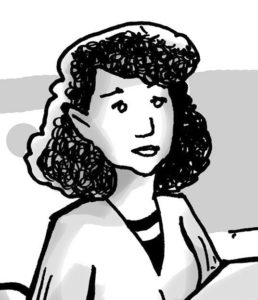 That sets up one half of the problem addressed in this story. The other comes from Vanessa’s teacher, Mrs. Cummings, who is concerned that Vanessa is wantonly oblivious to some of the new rules of sensitivity in our times. In effect, Mrs. Cummings is imposing an ethos that is very prevalent in the world’s culture, that has its own moral code and set of virtues and sins.

I was very conflicted about adding this into the book, but I didn’t feel as if I could ignore it. Growing up these days, there’s no way that my girls wouldn’t have been exposed to this complex set of rules called political correctness. It certainly has some benefits, but there is also a negative side to it, as Vanessa becomes aware. And so, she is handed a dilemma by Mrs. Cummings: Should she accuse the unlovely Erin of hate speech, for some name-calling that Vanessa never thought had any racial connotations?

And there are other problems brewing. After the Tuesday ETC meeting, she realizes that Xenia is troubled, and they have a little sharing time. Xenia did online research (of course), and now is very upset by the idea that someone would think that she has Asperger’s syndrome. By the end of the story, she will have to face a decision, as Vanessa will. Should Xenia find out for sure whether she has this disorder? Reading the doctor’s report from a few years before will tell her, but should she?

And so we come to the theme of the story: Labels. It is terribly important in the chaotic years of early adolescence to begin to see your place in the world, form your identity. But in doing so, knowing what to reject may matter just as much as knowing what to accept. There are many people that mean well, but will pigeon-hole you without meaning to – the free-spirited but narrow-minded Mrs. Cummings might be a good example of that. In putting her arguments before Vanessa, it never seems to occur to her that she is jumping to conclusions and imposing her own subjective viewpoint onto her student.

So I made a decision, on behalf of both my girls – no. No, Vanessa would not be strong-armed into doing something that she felt was wrong. No, Xenia wouldn’t look at a diagnosis that she wasn’t ready for. Because in spite of the world’s opinions about these respective decisions, they would have been wrong for Vanessa and Xenia.

That’s what I was trying to get at with the metaphor Xenia tumbles onto, about lenses and glasses. They both help you see more clearly, but one of them does it in a narrow way that can also distort what you’re seeing.

“What I think we can say,” Anya offered, “is that camera lenses are just tools. The point of them is to bring things into the right kind of focus. But if you have the wrong lens, you’ll get the wrong picture. I should know. I’ve had my share of those.”

That kind of distortion is what both girls reject, in the end. 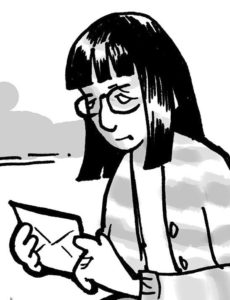 We find out a little bit more about Vanessa and Xenia in this story. For the first time, we find out that Vanessa is a person of color – she always was in my mind, but it didn’t matter enough to spell out. And we know that Xenia may actually have some issue with high-functioning autism.

But in the end, neither of those data points mattered as much to me as showing the type of people they are. They are independent, grounded and have some real courage. I believe what Vanessa’s father said to her:

I care a lot more about the quality of your character. What you stand for. What you won’t stand for. Those matter much more to me.

“The quality of character” is a reference from Martin Luther King’s “I Have a Dream” speech. God willing, the generation we’re raising now will face down these challenges and prove the quality of their character as well.

Next week: The last story gives us a mystery to solve and much is revealed.