Chapter 29: Who soars the highest?

Pascha, Reading through "Vanessa" with me 22 Apr 17 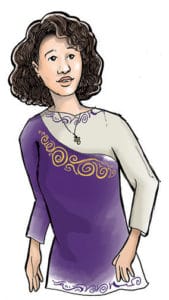 The cover image of Vanessa catches her at the moment when she heard the geese coming. It’s the type of thing that makes me wish I were a better artist.

Re-reading this last chapter of Vanessa the Wonder-worker this morning, I think have an apology to make. She’s not really the main event in this final chapter, is she? I wind up her story, but I probably spend more words on others. That hardly seems polite, after all she’s been through. Goodness gracious, she even pulled off “the new Miracle of the Geese.” Surely, that deserves some respect.

But there are other repercussions of the amazing events of that night, and that’s really what takes up most of the chapter and finishes out the book. To be sure, we catch up with Vanessa, who was able to get to the church service the next day. And after everything that has happened, she experiences the divine liturgy in a way she previously hadn’t — her eyes and ears and heart are open, and the service fills her with joy.

That is surely one of the points of this book. If you remember, back at the beginning of this series, I said that it seemed to me that there were four questions that Vanessa the Wonder-worker would have to answer: what happened to the Every Tuesday Club; what is Vanessa’s moment of truth; how do Christians interact with non-Christians, and; what about our claims of miraculous events?

It seems on that night as though everything comes down to that second question — to Vanessa and how much she has been changed by the past few weeks. When she has to choose between being in the spotlight or giving all of that over to someone who had suffered deeply, she made the right choice. And because of that, Vanessa was able to be a vehicle of grace.

But the answer to her “question” also leads to the answer to the last two. The things we do, the decisions we make, have ripples. The last chapter is really more about those ripples — the repercussions of Vanessa’s actions. Specifically, two things … 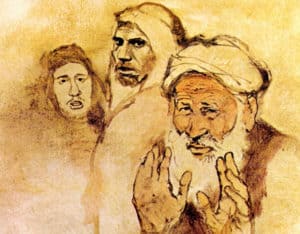 In his book “He Was One of Us,” artist Rien Poortvliet had this illustration of the people around Gadarene asking Jesus to leave after he cast demons from the possessed man. It is a perfect image, I think, of that terror some have of seeing divine energy at work.

Do you ever wonder what would happen if a miracle really were recorded on a video camera? Goodness knows, some things come close. But it seems to be God’s will to always leave the door open for those who want to disbelieve — I suppose you could hardly call it faith to believe in something that was demonstrably, obviously real. But just for the sake of argument, what would happen if a miracle did happen, in front of everyone, caught on video?

What happens at Woolcroft the morning after is my answer to that. Someone else’s might vary, but this is my best guess. I don’t think people would be able to accept it. I think that the very evidence of their eyes and ears would suddenly be a problem, and any hard evidence that existed would be deemed too scandalous and offensive to remain. Those who were the human agents of divine grace — in this case, Vanessa, her mother and even poor James — would, I think, suddenly be viewed with extreme suspicion, and they would probably suffer serious consequences. Caroline Sharp is my stand-in for the secular world, and I don’t mean to be too hard on her. The fact is, if miracles were demonstrably true, faith-challenged people would have to consider what else of the Christian narrative might be true. And that is a rather terrifying thing, if you have convinced yourself that you’re safe in a godless universe.  Caroline is just making “management decisions,” (as she calls them) and saying that nothing happened. In the same way that James was prepared to construct an elaborate lie in order to “get at the truth” with his nasty prank, the Foundation president is willing to edit and alter a video so that the public wouldn’t “draw any false impressions.” Anything it takes to sweep a miracle under the rug. 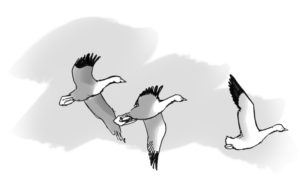 But James gave me the opportunity to answer the last question. Because in the end, what makes him really reconsider his rejection of God isn’t the showy, dramatic thing that happened out at the goose enclosure. What I called “the new Miracle of the Geese” was just the aftershock — it was just the visible, audible testimony that the miracle had already happened. I needed Fr. Andrew to supply the first hint of that — “The real miracle to me is still the way that lives are transformed by the grace of God.”

And we have to revisit Unit 6B one last time to see what he means by that. Because it’s not what happened with the geese that is on James’ mind. What is haunting him is what the camera caught back in the auditorium: the look on Vanessa’s face when she was severely tempted and didn’t give in. One little act that was self-sacrificial, in the way that Christians know so well, and it made James examine his conscience and consider what it would mean if the Christian narrative were, after all, true. One life transformed, and it transformed others.

So in the end, my little paradox is that it wasn’t Vanessa who performed the greatest miracle; it was James. Her holy fire passed to him, and he passed it along. I loved ending the book with a kind of cliff-hanger. A video like that, loose in the world, picking up views, getting past people’s defenses … can you imagine?

But then, this close to the Feast of Feasts — the annual commemoration worldwide of the Resurrection of Christ — maybe we can imagine. Fr. Andrew was right about that as well. Miracles don’t pass out of our lexicon, our culture, even when we may want them to. They have a life all their own, and that life whispers to us.

Christ is risen from the dead, trampling down death by death, and upon those in the tombs, bestowing life!

One last post, I think, to collect up all the odds and ends!