Chapter 28: The new Miracle of the Geese

Lent, Pascha, Reading through "Vanessa" with me 19 Apr 17

First of all, the important things: I hope everyone had a wonderful Easter or Pascha!

Now that we have that amazing Paschal light to read by, maybe we can coax some interesting things out of the last two chapters of Vanessa the Wonder-worker. Vanessa has come through weeks of hardship and discovery, all because of a bet that she made with her brother. Because she couldn’t stand to just let him leave the Church, she agreed to the crazy idea of trying to produce a miracle for him. He also told her that he would prove to her that miracles didn’t exist, and we know now that that was just a kind of nasty prank he was going to play. That prank didn’t happen, as it turns out, because of a simple maneuver by practical-minded Xenia — she literally pulled the plug on him.

However, that doesn’t mean that Vanessa’s part of the deal is null and void. James may think it is; Vanessa may even think so, too. But with everything that has happened, she is in a place where she is open to things that might have otherwise been oblivious to — be alive to possibilities where none would seem to exist. It’s a place that Abigail frequently inhabits, which is why she knows before Vanessa does that something is in the air. When the Angel Wings festival is over, and people are wandering around near the geese enclosure before their drive home, it seems like the three snow geese are unusually alert. 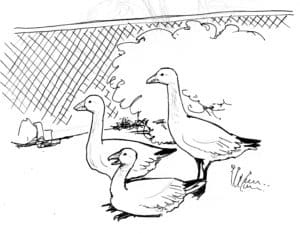 “No, they don’t,” Vanessa agreed, feeling the breeze in her face.

“They look like —” And she stopped, oddly uncertain of what she
was thinking.

Abigail had kept very still, gripping the fence tightly. When she spoke, her voice was oddly quiet. “They’re waiting for her,” she said.

Maggie turned a puzzled look on the white geese, standing at unmoving attention. “Waiting for who?”

Maggie looked more confused than ever, but Vanessa breathed in and felt as if the evening air filled her with a profound happiness.

How strange is it that Vanessa suddenly knows what has to happen? How strange is it that she walks into the enclosure without any hesitation or self-consciousness, and sings “a special song,” just as Mary did all those years ago? I suppose my contention is that it’s not necessarily strange at all, just unusual. It isn’t very often that human beings are ready and willing to be a part of such things. I had to write all these pages to make a case for what it would take for a young girl to be able, even for just a few minutes, to do what the wonder-working saints have done — to be living torches of Holy Fire. I’m doing it in a fictional way, which is imprecise and may even seem irreverent. But I hope readers can understand that I’m just using songs and snow geese to paint a picture of something that is almost by definition mysterious and indescribable. The Holy Spirit moves in our lives — in the life we live together on this planet — in the actions of grace that none of us can stop or start or capture. Grace is a constant energy, at work everywhere.

In this case — in the little fictional example I cobbled together — people hear the song, see the geese arrive and it brings them joy. But that isn’t a universal response. The very same thing is disturbing and even terrifying to those who are worldly-minded. For those that can’t accept the blessing of Grace, it may seem nightmarish. And certainly chaotic, which is why Caroline Sharp’s splendidly-planned event suffers from the Miracle of the Geese.

It was terribly fun writing what would happen if a flock of geese “happened” to something that just couldn’t handle them. As for what it looks like when snow geese take off, here’s a quick idea:

I can see how that might put a damper on an elegant breakfast event. But all of that seems like it was enough to make James finally cave:

She followed the sound and saw him about ten feet away, watching her with great amusement. When he knew she was looking, he gestured around meaningfully — to the collapsed tent, the feathers, the fallen lights, the broken fence.

He cupped a hand to his mouth so she could hear him above the shouts.

Of all the things that had happened that night, that one made her the happiest.

So that’s it, then. All it took to secure a change of heart was something amazing and dramatic. But actually, that’s not quite it. One last chapter to go, in which we’ll say some last things about miracles.