Chapter 26: Where Mary came from 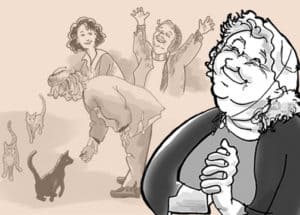 It’s Palm Sunday today. Lent is over, and our journey to Pascha comes down to the last amazing days of Holy Week. I hadn’t meant to let the posting on Vanessa the Wonder-worker go this long, but since it’s the way it worked out, perhaps it’s fitting to see Vanessa’s trek through to its conclusion this week.

After coming through so many difficult weeks on her own journey, Vanessa and her friends are ready to discover something about the holy woman, Mary.

Back when we began, Vanessa hardly knew this odd character from church. She saw that Mary showed up at services sometimes, and hardly gave the homeless woman another thought. But then came all of the strangeness that began on that one Tuesday night, when she had an encounter with Mary-Lily and then with James in a brief span of time. And now, as the big showdown of Ascension Day approaches, Abigail and Maggie bring the girls together for an emergency Tuesday night meeting, because they have made a discovery.

Vanessa pursed her lips, snatching the printout from Abigail’s hands. The text ran in a skinny column down the center, with a large headline that jumped out.

“WRONG MADE RIGHT: Freed from Woolcroft after 23 Years”

Vanessa heard a sharp intake of breath from either Photini or Xenia, but she kept reading, feeling her breath come faster as she went.

“When Mary Lilley and Patricia Ellis walk out the front door of Woolcroft State Hospital next month, they’ll be taking their first steps outside the institution’s bleak confines since they were children. They will also, with those few steps, be correcting a great injustice that has doomed them to spend 23 years of their lives as virtual prisoners of the Woolcroft State Hospital.”

It was all just a horrible mistake. Along with another girl, Mary was institutionalized when she was only seven because an aunt mistook a temporary loss of hearing for a permanent disability along with mental slowness. And growing up in Woolcroft, Mary naturally imitated the behavior of those around her, so that she looked and acted as if she was developmentally disabled.

I had heard of these things happening back in the ’50s and ’60s — once from a person who knew the woman it happened to. When I went to look online, there were unfortunately quite a few accounts of people who had been wrongly diagnosed and then spent decades shut up in state hospitals. Part of the blame surely lies with those who should have been doing a better job of admitting and monitoring patients, but unfortunately, there are also family members — like Mary’s aunt — who want to be rid of a relative that seems like a burden.

So Mary’s secret, then, is just this: her life has been filled with sorrow, betrayal, loneliness and neglect. Through no fault of her own, her freedom and childhood were taken away from her, and she was a virtual prisoner of a flawed system that eventually put her out into the world — friendless, penniless and totally unprepared.

I think the reason that I gave Mary this tragic backstory — and the reason that the girls had to discover it — was that it is precisely the kind of thing that can bring a certain kind of person to a transcendent place. Not always, to be sure. And I’m very glad that I wasn’t destined for such a calling. But for some, the very worst that life has to offer seems to be the furnace that miraculously transforms base elements into steel or silver. 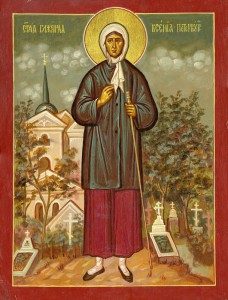 That observation is based on the few individuals I can think of. Saint Xenia of St. Petersburg came to mind. I offered a longer story about her in another post, but for now, I’m focusing on the fact that what “set her off,” it seems, was losing her husband, who died at a party without the benefit of any final confession or absolution. When she found out he was gone, she put on his soldier’s jacket — which is how she is often depicted in icons — and insisted on being called by his name. She must have seemed to everyone as if the excess of her grief had driven her insane. But insane people don’t do the things she did. They don’t give away all their worldly goods, continue doing acts of mercy while living on the cold streets of Russia and bless others by miraculous God-given gifts of insight and foresight.

I also remember hearing of a woman who once went to a church I attended. By the time I was going there, she had been gone for a few years, but she had made such an impression that parishioners told me about her. She had lived in one of the Baltic countries in the Soviet Union, and when the Communist soldiers found out that she was a Christian, they put her down in a mine to do hard labor. From time to time, they would bring her up and ask her if she was ready to give up her faith in Jesus Christ. When she said she wasn’t, she was put back down in the mine. On one of these short interviews, a soldier broke the cross she was wearing around her neck. She kept wearing it; she wore that broken cross even after she managed to escape and make her way to America. Her life even after those ugly years was far from idyllic — problems seemed to find her wherever she went. But she wore that broken cross, she inspired others by her example, and when she died, the church got special permission to bury her on the church grounds.

There are other people who come to mind — sometimes people that I barely knew. Just a few who shone with an inner light that only seemed to get brighter in spite of unbearable suffering. And all of the ones I knew were deeply religious, because only in Jesus Christ can you find that kind of truth and power that gets stronger the more it is under attack.

It is when they have that last piece of the puzzle that the girls can realize that Mary is one of those rare individuals whose very life is a kind of miracle. Because with every reason to be bitter, Mary broadcasts only love. And not the cheap imitation that you see so often in pop culture, with celebrities flippantly claiming they love everyone because it will help to sell their books or records. This isn’t some superficial head trick or accident of a diseased mind — Mary was sustained by the love of Christ when all other people had abandoned and disappointed her. The love that she held onto became such a part of her that it is a guiding light to others.

When the girls encounter her again in the hallway, they are all humbled by her piety. And Mary acts a little differently with them then. She doesn’t need to act foolish or hide how much God reveals to her. She can truly be herself. And she can tell them a little something about themselves, and about what might await them.

Mary took a step back from the group to take them all in, looking them over with evident pleasure.

“Yes, here you are,” she addressed them. “And you all have to stay together as best you can. The world won’t make that easy, but you have to try.”

“And I’m glad I met you, dears,” Mary said, clapping her hands together with satisfaction …

She leads them off to where her nearly-magical cabdriver Pepe has been instructed to collect her. There is finally a promise that she will come to the Angel Wings festival, just when Vanessa had thought it a lost cause, and then Mary is gone.

But her story needed to come out. When Vanessa goes home, it is finally time for her to tell her mother the truth. Now that she knows about Mary, and now that her heart is breaking with the knowledge, she can tell her mother what has happened. Because — it seemed to me — the truth about Mary should be something that brings them together. Vanessa and her mother are a bit of a stormy duo — such mirror images of each other in temperament and passion. Vanessa is at that stage in her life where she begins to want to be independent, but that is actually when you need your mother most of all. Vanessa needed her that evening, and being able to close out that long Tuesday evening with just the two of them consoling each other seemed entirely right and proper to me.