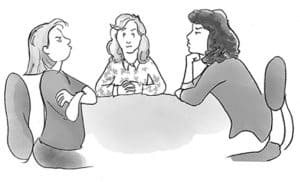 No matter what the cause of the disagreement, arguments can be nasty things.

Vanessa the Wonder-worker is partly about the Christian interaction with the world. We Christians are blessed by what we have received, what we’ve been taught, what we believe. We live in the Church Age, when all humanity should know that “God so loved the world that He gave His only begotten Son” — that should amaze and lift up any human being on the planet. Yet we live in a world that self-identifies as post-Christian, and those around us are likely to be either ambivalent or outright hostile to us. They say that we’re totally mistaken, that we’re lying, that we don’t know what we’re talking about. In some areas of the world, Christians are violently persecuted. But even in Western countries where the worst derision is only on social media and pop culture offerings, devout Christians are often held in contempt, dismissed as irrelevant or assumed to be harmless loons. What happens when that happens? How do we get along? And if we are actually called on to defend what we believe, can we do it? Can we “speak the Truth in love?”

This painful subject was the reason I almost couldn’t write this book. I have said already that writing about music and holy people was difficult. But writing about this terrible discord was worse, because it threatened to take the book into some dark and discouraging territory. 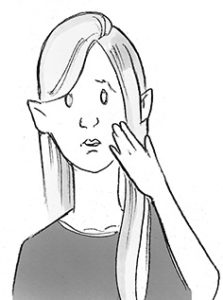 In Vanessa the Wonder-worker, the little subplot with Photini is more about how I wouldn’t want someone to act. Photini is shy and diffident, but let’s face it — she also has a bit of a holier-than-thou streak. She’s only 11 years old, so maybe she’ll grow out of it. But under the duress of having to face down a rather nasty girl in school, Photini lets some bad impulses get the better of her.

This side-story with Photini and the atheist girl represents those times when arguments over religious issues are just childishness, really. Sometimes the debate over something gigantic and over-arching is only an excuse to get into a scrap in the most human, least angelic way. If the topic weren’t as important and personal to Photini as religion, wouldn’t she have realized a lot earlier that Ernestina is the sort of person who is always itching for a fight? But then, would Tina have been quite as feisty if Photini hadn’t looked down on her and acted self-righteous? It’s a bit of a relief when they’re finally just tussling like a couple of alley cats — it was probably the most honest interaction they had. And for Photini’s part, this humiliation might even be good for her. It punctured her overinflated ego, which is never a bad thing. In her own little way, Ernestina might have helped Photini be a better Christian. She may even be a better human being, but we’ll see how that turns out in a later chapter.

So sometimes arguing about religion is just about being childish. But there are times when it is more than that. What about when someone is asking real questions and expects real answers? What do we do then?

It doesn’t happen often, but sometimes when you least expect it, the honesty light is suddenly lit and you’re called on to explain matters of faith. That’s when you find out whether your grasp of Christianity is as good as you thought. That’s the position that Vanessa is suddenly in. When James is pushed into the job of chauffeuring Vanessa home from the mission, the discussions end up turning to matters of faith. Thanks largely to Photini’s miracle cards, Vanessa just brings up some of the extraordinary events recorded in the Bible and throughout Church history, and she and her brother talk about them.

Maybe that’s not the most elevated platform from which to get into the realm of Christian apologetics, but it’s not the worst, either. These conversations can break out around the dinner table, during a work break, at the grocery store and — goodness knows — online. When they happen, are we ready to say why we believe what we believe? The impression I get from talking to a lot of other Orthodox Christians is that we’re not ready at all. If anything, we often sound like we would run away from a situation like that.

But … why? Is it because we’re that afraid of conflict? Or because we’re afraid we won’t be able to do it, and may end up having our faith challenged?

I understand both those answers, and discernment is definitely called for. But I suppose my privately-held belief is that every time we back away from one of those occasions, we should atl least go do some homework, in order to be ready next time. Those are opportunities, and they may be given by God as a chance to save those around us. 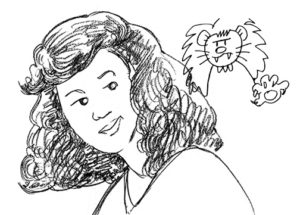 In the first book, Abigail doodled Vanessa like a lion. It turns out Vanessa needs a little lion-hearted after all.

When Vanessa just wades into the debate starting with the creation account in Genesis, she is able to see past some of the casual dismissals and scoffing that James indulges in and uncover a basic problem with the science-only approach … which is, that it only gets you so far. Empirical methods are by definition limited to what can be experienced with the senses or theorized by math and projections. That can seem incredibly powerful, when there are scientific journals filling up constantly with mind-bending data about sub-microscopic things or expansive astrophysics. But it isn’t really the perfect answer to everything that it is presented, as Vanessa is able to express just by asking James where things came from. Eventually, there are no more answers, only guesses. And it happens a lot quicker than the skeptics want to admit.

It may not be a perfect example — I don’t know; I’ve never gotten a chance to try it. But at least she tried. And it begins to shift James’ sense of being essentially and basically right. That is a huge step, and it may not look like anything very earth-shattering. But we are creatures with a God-shaped hole; if you eliminate the doubts and obstructions, a person may find faith in eternal things a lot less impossible than they imagined.

Getting to the heart of things

In the second conversation she has with him, driving to the Woolcroft rehearsal in chapter 22, things progress even further. The miracle cards this time are about saints, but it becomes obvious that James still remembers the saints, and has respect for them. When Vanessa questions him about that, he gives a rather weak argument that you could respect the saint but disbelieve the miracles they performed. Again, Vanessa sees past that. She is not only able to introduce that element of doubt into his assumptions, but to uncover some pain and grief that were behind them.

James shook his head. “Back to that again. It’s always God with you.”

“And it’s never God with you,” she responded sadly, clicking off her flashlight. “I believe God can do these things, James. I really do. But the most incredible of those is nothing compared with God loving us, all the time, every day. Because of love, He saved the world. So why do you need God to break His own rules to impress you? Isn’t love enough?” …

Finally, he gave a kind of chuckle that didn’t have any humor in it and continued bitterly, “In case you hadn’t figured out, all that nice stuff has been letting me down these days. I went to see Dad last Christmas — my real dad, not George — and he’s remarrying. So Dad doesn’t want to see me again, because he’s starting over. His new wife doesn’t really like me, and he pretty much told me to stay away. And that’s that.”

That is the last thought I have about this nexus, this place of connection between those of us who believe and the disbelieving people that can be so venomous. It is worth remembering that people’s pain can come out as anger. Life can be very hard at times, and if you have really given up on the idea that there is any higher purpose to any of this, or anything eternally and lastingly good and beautiful to make it all worthwhile, how much more painful it must be.

Vanessa isn’t able to bring that conversation to a satisfactory conclusion, because they arrive at their destination and have to stop. She is determined to pick up where they left off on the drive home, but as it turns out, a very different conversation later that night will make that impossible.

Next time: The big kerfuffle in Unit 6B (end of chapter 22)