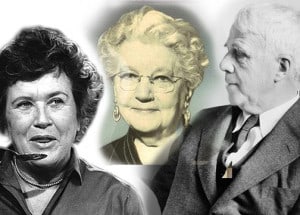 I love the words of encouragement that have come my way since Queen Abigail the Wise came out, but there was one atta-girl from a young teenage friend that especially makes me smile. There are a few high school girls in my church that were my cheerleaders once they found out I was writing a book. As I nervously prepared to release Queen Abigail to the public, one of the girls cheered me on with a well-intentioned pat on the back. “Just think,” she said, “To have written a book … at your age!”

I suppose I hadn’t really thought about it. I’m 56, which I know sounds pretty darned old when you’re in high school. But when it comes to writing a book, how old is “too old”?

My author friend Charlotte Riggle (who wrote “Catherine’s Pascha“) had a link to an online article that really went to the heart of this issue. The author rightly notes that: 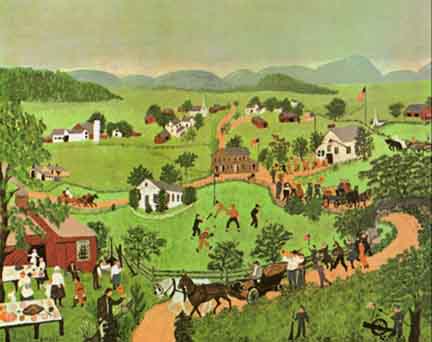 This painting — “Fourth of July” — is one of Grandma Moses’ most popular. She was 91 when she painted it!

Despite science, society and Silicon Valley’s common belief that creativity, innovation and excellence are the near-exclusive province of the young, a surprising number of late bloomers dot the annals of human history — women and men who endured years of hardship, failure and missed opportunities, or who toiled in obscurity for decades before making an impact in the later stages of life.

This article in Ozy details how “Late-in-life Geniuses Bloomed at Last.” Men and women whose gifts have enriched all our lives sometimes get started when they have more years behind them than ahead of them, apparently. Robert Frost published his first book at 39, but his best work wouldn’t happen until middle- and late-middle-age. Julia Child’s seminal cookbook went on the shelves when she was 53. Remember Grandma Moses? She didn’t begin painting her charming and popular scenes until she was 78 years old(!)

But the point here isn’t just to present myself as a spring chicken by comparison. I’m citing the article to encourage some of the others I have talked to since my book came out. Some women have wistfully commented that they have had an idea for a book just simmering about on a back burner, but they think it’s probably “too late,” somehow. If that’s you, or if you know someone like that, can I just add two words here? — Think again. If you’ve got a book idea, go for it.

After all, there’s a certain woman whose books mean a lot to us who could very well have decided it was too late. But she didn’t, and millions of her fans are very glad she didn’t.

It wasn’t until Laura Ingalls Wilder turned 65 that the first installment of her epic Little House on the Prairie series was published. By then, she had already devoted decades to being a farmwife and mother, schoolteacher, loan officer and newspaper columnist, and she had endured more than her fair share of hardship, from droughts to house fires.

Sixty-five! Now that’s what I’m talking about. So, if you’re a late bloomer like me … grab your pen or your keyboard and start blooming!