(Spoiler alert. If you haven’t read the book up to Chapter 23, don’t keep reading — I’ll ruin some surprises if you’re not there yet.) 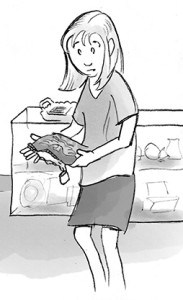 During Holy Week, some mysteries are cleared up. But they come as a pretty big shock.

Well, for those that have been reading through Lent and Holy Week with Queen Abigail the Wise, we’re now almost to the end. Just as it is for Orthodox Christians everywhere, this day — Great and Holy Saturday — marks the end of a few things and the beginning of … everything. It’s the end of one Church season and the beginning of another; the end of the Great Fast and the beginning of the Feast of Feasts. The black vestments that the clergy have been wearing have already been changed out for the white ones. The icon of Christ has been taken away, symbolizing the empty tomb. And tonight … everything will change. The contrast couldn’t be more startling — from the depths to the heights, from bitter sorrow to unspeakable joy.

And I suppose I better catch up with my little protagonist. Abigail has been through a lot since she missed the first part of Holy Week.

First of all, she got kind of a shock on Holy Friday. Suddenly, the strange encounter she had with Vanessa a week or so earlier becomes startlingly clear. Abigail and the other four girls end up having a very tense discussion with Vanessa, because the evidence is incontrovertible — Vanessa robbed the church bookstore. At first, Vanessa tries to appear cool and collected, but that doesn’t last. She never denies the allegation … but she doesn’t admit it, either. Although she is obviously shaken, Vanessa eventually agrees that she will tell Fr. Andrew what she did.

It’s a very hard thing to have to do, and Abigail is genuinely sorry for her. But besides that, there is something about all of it that just doesn’t seem quite right. Xenia, having a mind rather detached from the usual emotional baggage, notices a detail that is suggestive. But even Maggie and Abigail, who aren’t nearly so logical, come to the same conclusion — the whole thing just doesn’t fit. But she has to sleep on it. And since she receives so many of her little insights in church, she has to get one of those accidental clues from Fr. Andrew in order to figure things out. It takes one of the songs that Abigail has heard in church to bring her to that point of epiphany. The wise thief was one who wasn’t what he appeared — he had depths of virtue that no one would have suspected. And Abigail suddenly just knows — Vanessa didn’t rob the bookstore. She’s innocent.

Another impromptu grouping of the girls becomes confrontational, but this time, Vanessa’s half-truths and brittle masquerades fall apart. She tells the girls everything, though it costs her a lot to do it. But she has been carrying a burden that has been too heavy for her, and she insisted on doing it alone. Even after everything has come out, however, she won’t be dissuaded. She shakes them off and goes into the nave to confess to Fr. Andrew. And Abigail, without much idea what else to do, goes in after her. 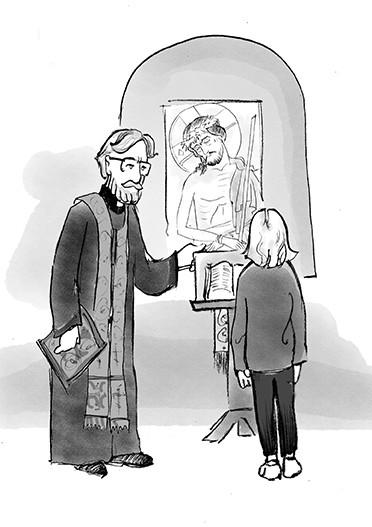 And this is Abigail’s most difficult moment. Left to herself, she isn’t really much for taking on big challenges. Life seems generally good, and she likes to just sort of sing and dance and doodle her way along. But starting the Every Tuesday Girls Club changed that, and it brings her right to the center of a conflict on Holy Saturday. She can’t turn her back on Vanessa, even though Vanessa pointedly doesn’t want her help. Just to stall for time, Abigail goes up to confession in Vanessa’s place, and she gets one of those little helps from her still, small voice that tells her to just be herself.

So she does that. She makes some things up and improvises and generally keeps things kind of imaginative, but kooky. It does buy her some time, but not enough. In panic, she directs all her focus to the icon of Christ in His suffering and prays an urgent prayer. Again, an answer comes, but this one much harder and more profound than the last: Be as I am.

This is Abigail’s moment of truth. There’s only one way to really help Vanessa, and that is to stand guilty in her place, just as Vanessa is willing to do for her brother. Just as Christ did for us all. Sometimes, if you want to save someone, you have to commit yourself to them totally and be willing to suffer. Abigail has the pure heart of a child, and so she does it: She tells Fr. Andrew that she robbed the book store. For that little moment, she assumes all of Vanessa’s hurt and sorrow (“I have been really afraid, but I’ve been trying not to let anyone see.”), but her bravery as well — Abigail is able to get through to Fr. Andrew that there is more to her words than just factual information. She is able to communicate the truth to him, They exchange a look of comprehension; he finishes the confession; she leaves, wondering if what she did will be any help at all.

At home, she lets herself go. Going through all that was very hard, and having empathized so totally with Vanessa, she can’t be the light-hearted little person she’s used to being. But though she cries, her soul is unburdened by remorse. Although she played the part of a thief, she acted more unselfishly than she has ever been. Her Saturday began in clouds, and it ends in rain.

But Pascha is coming.