The sins of a child, part 2

We’re getting down to the wire now. Palm Sunday marks the end of Lent, and it’s just two days away. And so you begin to see those long lines of people waiting for confession. It’s just human nature, I suppose. We Orthodox know that we have to go to confession during Lent, and yet how many of us wait until the last minute? 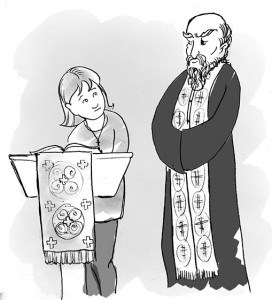 In Queen Abigail the Wise, Abigail has a set time to go to confession, but privately, she doesn’t really think that matters very much. Abigail’s mind has always had a bit of a tendency to wander, and right now she is more than usually distracted. Poor Abigail — she has gone through all the weeks of Lent just hoping that the Club would help her get the icon of St. Abigail that she saw in Fr. Andrew’s book. But instead, Maggie and Xenia and Photini were helped, and now there’s no more time. And on top of it, Abigail just can’t get Vanessa to treat her with the respect she thinks she deserves.

So she’s really in no mood to go to confession. The problem is — as I have found so many times — your mood doesn’t have that much to do with it. Except perhaps as a kind of reverse indicator — the times when you’re really not in the mood, you probably really need to go to confession.

Going through the motions, Abigail is in danger of giving a fairly false confession, and no doubt reaping paltry results. Lucky for her, she has an experienced confessor who has been paying more attention than she knows. Abigail goes forward to Fr. Boris, prepared to talk about some incidental bad moments but generally ignoring the elephant in the room. But Fr. Boris isn’t about to be put off that easily.

A kind of small grunt came from the depths of the priest’s thin black beard. “What about Vanessa?”

Abigail stared at him in total surprise. “Vanessa!” She glanced around and lowered her voice. “Vanessa Taybeck? I’m fine with Vanessa. Why wouldn’t I be?”

Father Boris shook his shaggy head very slowly. “I have seen. Vanessa and you — you and Vanessa. You are angry. Why is dis?”

Fr. Boris makes an educated guess that confronted with the matter directly, Abigail will begin to talk honestly, and he’s right. Her heart is too full, and she starts to open up about her anger, hurt, resentment and even jealousy. Because there’s no use in confessing on behalf of an artificial person who doesn’t feel things deeply, doesn’t want an eye for an eye, doesn’t nurse grudges. It’s one of the main times in our church life that we have to be honest.

When Fr. Boris provokes that honest response from Abigail, he can get her to see things in a different light. When she blurts out that she thinks the story about St. Mary of Egypt had to do with Vanessa’s sinful state, Fr. Boris can calmly lead her to see that the story might really have been for her, about her sinful state.

It’s very hard to humble ourselves. No doubt, it was a bit rough for Abigail to have to be confronted with her own culpability. But as we “older kids” know, it has to happen. A rotten tooth hurts, and it may hurt more to pull it out, but that’s the only way you can be restored to health. So Abigail finishes the confession more soberly than she began it. She receives absolution and only then begins to feel how much of a burden has been lifted.

Abigail’s halting steps slowed and then stopped. Near the door was an icon of the Theotokos — the Mother of God — that glittered in the candlelight. Abigail stopped beside it, her eyes still fixed on the carpet. The murmur of voices in church soothed her — the low sounds of others giving confession and an altarboy reading a psalm that she heard often in church. She heard the words of the psalm without really trying to understand them. “Create in me a clean heart, and renew a right spirit within me.”

Abigail will need that clean heart and right spirit, because the events she set in motion with the Club are about to come to a crisis point. Abigail had to face up to what she had really been doing, how she had let things slip. But having done so, it’s time for Lent to end and the next phase to unfold. At this point in the Church season, the focus shifts away from self, away even from the awareness of our sins. Lent ends in Holy Week, and Holy Week will put some very serious things before Abigail and her friends, and a revelation of sorts to see her through.