The sins of a child, part 1

In Queen Abigail the Wise, Abigail’s Lenten journey eventually brings her, of course, to the last Sunday of Lent. That’s the Sunday where we hear about St. Mary of Egypt, my patron saint, and Abigail comes to it just in time. She doesn’t realize it, but she has been getting into deeper and deeper waters — with the Every Tuesday Girls Club, and also with herself. 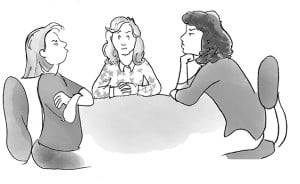 Just to be clear, Vanessa is kind of a pain. But Abigail doesn’t handle things very well, either.

As we come through Lent, we are directed by the Church to pay more attention to ourselves, our actions. It’s the time for some spiritual house-cleaning, and for most of us, it doesn’t come a moment too soon. Little Abigail doesn’t attend to things on this level, of course. But there’s still something about this season of the Church that catches us up and brings us along. So would a child have to deal with sins and sinfulness?

I think that the answer, which is so difficult for us adults to have to acknowledge sometimes, is … yes. Like children themselves, these things are usually miniaturized — few children, thank God, are capable of adult-sized crimes of thought, word and deed. But that doesn’t mean they don’t exist.

In Abigail’s case, she’s going through a process that she set into motion — dealing with the biggest problems she and her friends have. Father Andrew did warn her at one point that what she started by accident might have some serious repercussions, because you never know what’s going on in other people’s lives. And there is an issue that she and the girls are about to face — the problem that Vanessa didn’t want to admit she had. It will end up catching them all up soon, and they’ll have to figure out what to do.

The perils of being an angry young woman

But before that happens, Abigail has to deal with her own little tempest. Things have gone from bad to worse with Vanessa. It’s certainly not all Abigail’s fault. Vanessa is going through some stormy seas of her own, and she has given Abigail a lot to resent her for. But Abigail is showing that total lack of restraint that I remember as a young girl.

I wish I could say that part is all a creative construct, but unfortunately, I can remember those girlish bouts of foul temper like they were yesterday. Maybe because your world is so small at that age, your emotions can seem like they take up all of it. I could get caught up so easily into really nasty gossip, utterly petulant spite and jealousy. Little girls can look so cute on the outside, but I know first-hand that what’s going on inside may not be that cute at all. 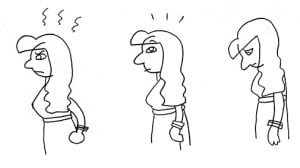 How would a child interpret St. Mary’s story?

And Abigail is lost. More lost than she knows. Fr. Andrew tells the congregation at St. Michael the Archangel the story of St. Mary of Egypt, which is a narrative passed down for many centuries of the conversion of a thoroughly wicked young woman into a hermit who atoned for her sins all alone in the desert for 47 years. (If you’ve never heard it, you can read it HERE.) When he recounts one of the details of her pre-conversion life that Mary berated herself for, he remarks, “Apparently, she was a very rude and pushy young woman.” And Abigail immediately thinks of Vanessa. She’s a little ashamed of herself for doing so, but still, when the story ends, she is caught up in the power of it without considering for an instant that it may have something to tell her about her own condition:

This is what she had been supposed to hear this Sunday; Abigail was sure of it. She looked at the doodles she had made during the homily, and was pleased with them. She was sure they would help her recall the story. But what did it mean? Who was it for? Did she know anybody in that situation? Abigail felt as though maybe answers would come to her in time, if she could just be ready to hear them.

And those answers will come. But not until Abigail can change her point of view. To do that, she’ll need the Church’s help. She’ll need the sacrament of confession.