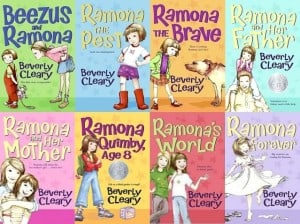 And this is just ONE of Beverly Cleary’s characters! Are you seeing this, Abigail?

At the time I got the idea for Queen Abigail the Wise, I had never written a children’s book (or any other kind of book). So it was rather foolish to just jump right in, but the Queen Abigail idea was such a grabber to me that I had to go for it. When I realized that I would have to spin up and give myself an education overnight, there were two authors for children I re-read avidly and earnestly, trying to grab as much of the magic out of their styles as I could. One was Madeleine L’Engle (who I gushed about back HERE), and the other is the woman who is exploding all over the internet today because this is her 100th birthday(!) — Beverly Cleary.

Having made it to such an auspicious birthday, the author of Beezus and Ramona, Ellen Tebbits and dozens more children’s classics already has gifted writers singing her praises today — HERE and HERE and HERE, just for a few examples. I won’t try to improve on any of beautifully articulated praises of these wordsmiths. But it wouldn’t have seemed right not to offer my own thanks to Ms. Cleary for her gift, both to Grace as a child reader and Grace as an adult writer.

The top 3 things I learned from Beverly Cleary

Those are just a few things that come to me right now. If I stopped to think about it more, I’m sure I could come up with more. And it’s likely I will — now that I have re-discovered Beverly Cleary’s books, I’m likely to keep reading them. So maybe by the time I have my 100th birthday, I’ll have a better list. Be sure to check back then, won’t you?