A fan Magda wrote me how one portion of the book had affected her small children:

“The 3yo (Timmo) has taught the 21mo (Symeon) to run around saying, “Sackbut!” and laughing, and Teddy has already looked up how to say “sackbut” in Spanish. I never thought the word was quite this funny before, but I now understand firsthand why Abigail and her friends couldn’t get anything else done at that meeting!”

I loved the mental picture that came from that, especially since it comes from one of my favorite scenes from Queen Abigail.

On the way to the fourth Sunday of Lent, the girls have another meeting of the Every Tuesday Girls Club, and this time, the problem that they have is from shy Photini. Her mother has seen to it that she will have to do the lengthy reading from Daniel that comes on Holy Saturday, and Photini is mortified to think of all the things that could go wrong. The meeting derails into Photini recalling bloopers that happened in church and the other girls trying not to laugh. In an agony of dread, Photini starts naming off the hard words out of the reading that a person has to say.

Abigail cleared her throat in an effort to sound stern. “But really, Photini, I think — ”

Photini had one more. “You have to say ‘sackbut.’”

Abigail wasn’t sure she had heard right. “You … you have to say ‘sack butt?’”

“Sack butt!” roared Vanessa. And this time, it was impossible not to laugh. Abigail couldn’t help it, and the other three girls didn’t try. Photini really did try, and even said, “C’mon, you guys” in a plaintive way a time or two. But in the end, she was giggling worse than any of them. 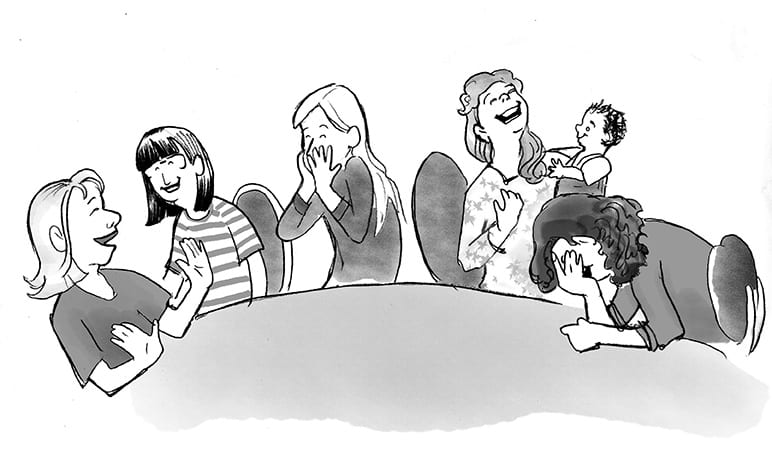 Abigail tries to keep the meeting together, but it turns into pure silliness. That’s the way it goes sometimes.

That kind of giggle-fest is something that every girl or boy who has hung out with friends knows all about. And I like that it overlaps the kind of unintended humor that is brought to us by a Church with such deep roots that it has seen language change over and over. (By the way, a ‘sackbut’ is similar to a trombone.) And “the people’s work” of liturgy has such a serious affect to it that we’re just bound to have words that go wrong, musical mishaps, clerical goof-ups and all the rest. Goodness knows, those things can be a kind of disaster, but it’s occasionally worth considering that they’re just part of life going on. Church services, after all, aren’t meant to be perfect performances — they’re our dialogue with God. There is room for all the grandeur that we can bring to the occasion. But I like to think that even the missteps and goofs are part of the spark of humanity that we bring to things as well. Life has uncertainties in it, which is part of what little Photini is terrified of. And she thinks that church is a place where you’re supposed to be perfect, which makes the whole thing even more stressful. But I like to think that she’ll find out in time that it really is okay to be imperfect — God won’t be shocked or surprised by it, and you may just have a reason to laugh out loud, which isn’t such a bad thing.

Magda had another encounter with this kind of unintended comic relief:

“At a recent Great Compline service, I read the prayer to the Theotokos. We got home and my husband let me know I still had a sticker from the pediatrician’s office—where I sit down! That made me think of Photini’s fears about reading in church!”

Boy, can I relate. If I started telling all the stories about things that went sideways in serious church services, it’d take me an hour. And most of the time, I’d probably be laughing. But then, that’s part of the point, I think.

The Orthodox Church is a serious church, and Lent is a serious time … but we can still take a moment every now and then for the very human phenomenon of comic relief.