The action in Queen Abigail the Wise really depends on problems and problem-solving. Each of the five girls has one big issue they’re dealing with, and they will all have to help each other in order to address them. The first one is Abigail’s best friend, Maggie, who has been having major difficulties taking care of her baby brother.

That seems insurmountable, but Abigail has a kind of epiphany. After praying in the way that her mother told her — using the Jesus Prayer to clear her head and calm herself — Abigail starts looking through a book of Old Testament stories, and one of them in particular catches her eye. She thinks it would be a good time to tell Maggie about King Solomon and the baby. This story from 1 Kings 3:16-28 (3 Kingdoms 3:16-28 in the Orthodox Study Bible) is a classic — two women who both claim to be the mother of the same child. But does it really have that much to do with Maggie’s dilemma? Can it really help at all?

And in fact, when Abigail relates the story at the girls next meeting of the Every Tuesday Girls Club, it meets with mixed reactions: 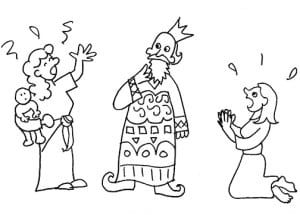 “But …” Xenia’s voice piped up. “He was going to kill the baby? That’s not right. Just because you’re a king doesn’t make that right.”

Photini tried to help. “He wouldn’t really have let them cut the baby in half. He just said that so that the fake mother would say what she said.”

Xenia was unconvinced. “It just doesn’t seem like a very good way to do things.”

Abigail’s attempt to bring the story home continues to cause problems — Vanessa sulks, Xenia probes with unanswerable questions and Photini, although impressed with the story, can’t communicate why it matters. The whole thing looks like it is descending into comic relief with no chance of real benefit. And yet, something else is going on, but on a subtler level. When Abigail was introducing the subject, she told Maggie, “I think this story is for you.” And so it is. Though Maggie’s attention shifts almost immediately to some basic care-taking of her brother, the story of King Solomon, two women and a baby has already begun to go to work.

The whole situation in the room comes to a boiling point, and a certain fuse is lit. Maggie has been stuck in her own stress and frustration, and Jacob has just become a nuisance and nothing more. In order to get past all that, something really basic had to be ignited — the primal and profound kinship of a brother and a sister. 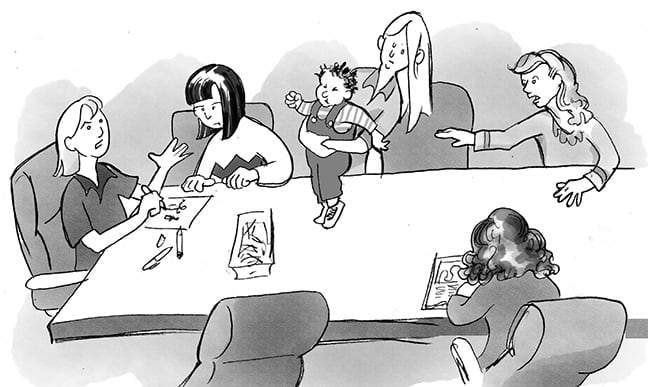 I had a lot of fun drawing the scene with the girls and Jacob.

And that, to me, is the kind of thing that a 21st century Christian can experience in the writings of the Old Testament. When Maggie’s temper cools down and she can talk to Abigail again, she says,

“I heard that story. I know that it’s not like stories people tell now. I know why Xenia and Photini had questions. But to me …” There was a pause while she thought and looked at Jacob, “To me, it was about a king who had wisdom from God that told him that a mother’s love for her son is stronger than anger … or selfishness. Or, you know, … anything.”

C. S. Lewis said in his book about the psalms that we can sometimes feel more kinship with the unknown psalmist of ancient times than we do with our own contemporary poets. The writings of the Scriptures still have power to move us and illuminate our way. Maybe that’s why the Orthodox lectionary — the system of daily Bible readings recommended by the Orthodox Church — centers on the Old Testament during Lent. I hadn’t noticed this until my priest pointed it out recently, but it’s true. The lectionary readings are from Genesis, from Isaiah, from Proverbs, and later on other books will be added … but not from Acts or the the epistles or Revelation.

There is still so much that we have to learn, and so many times that knowing our human history can help us along the way. I hope I’m always willing to look to the stories of human fallibility and God’s faithfulness in the past. As Maggie says, these stories … work.