“Abigail, I forgot!” she whispered. “This is the Sunday of Orthodoxy — the Sunday with the icons.”

Abigail looked blank, so her mother said, “You know, the icons? The pictures in church?”

Abigail knew what icons were. When the Alversons started coming to the Orthodox church, Fr. Andrew told them all about icons.

“The icons should have their own Sunday,” Abigail said with affection. She liked looking at the pictures of saints and thought they liked looking at her. There was something about them that made her happy.

My heroine in Queen Abigail the Wise was bound to have good feelings about Orthodox icons. She is a bit of an artist at heart and has that kind of eye. So on the Sunday of Orthodoxy, Abigail doesn’t need to be convinced that the icons deserve special attention — she feels a particular fondness for them herself.

An anecdote comes to mind — one that Met. Anthony Bloom relates in Beginning to Pray:

Children rarely seem to need to be taught how to venerate icons. This photo is from St Anne Orthodox Church in Oak Ridge, Tennessee. The child-sized analogion was built by the rector, Fr. Stephen Freeman. Image by Magda Andronache.

In the life of a Catholic priest of France, the Cure d’Ars, Jean Baptiste Viannery, there is a story of an old peasant who used to spend hours and hours sitting in the chapel motionless, doing nothing. The priest said to him ‘What are you doing all these hours?’ The old peasant said ‘I look at Him, He looks at me and we are happy.’

There’s a simplicity to that love of Christ that is possible for us every time we stand before icons. For some reason, I think it’s much easier for children to feel and know than it is for adults. There has certainly been enough debate about the use of icons in Christian worship — there was even a long and bitter battle, which the Sunday of Orthodoxy alludes to. But they are really the most natural thing in the world — a loving image of our Beloved and, by extension, to the events of His life, the parables He told and the many others who we love because we first loved Him. All the other things we say about icons are just words; the icons really speak for themselves … and children seem to have the easiest time “hearing” them.

Abigail has a basic and primitive understanding of all that, which is a fine start. But she’s only human, and there are a lot of things that can interfere with a simple liking for icons. When she hears that the time spent in church is going to get longer, affection instantly gives way to irritation, and she lets her mind wander in ways that eventually go badly for her and for others. She ends up with her parents having to explain herself in Fr. Andrew’s office, because “it’s a serious thing to spoil a procession and almost send icons and people tumbling into the snow.”

But just as the icons serve as a beginning of her troubles, an icon will help point the way to something better for her — a more mature faith that will be challenged and fortified. Abigail may have upset the little procession around St. Michael the Archangel, but what she doesn’t know yet is that she will have to go on her own little pilgrimage before she will be ready to arrive at the light of Pascha … and an icon will help her on that journey. 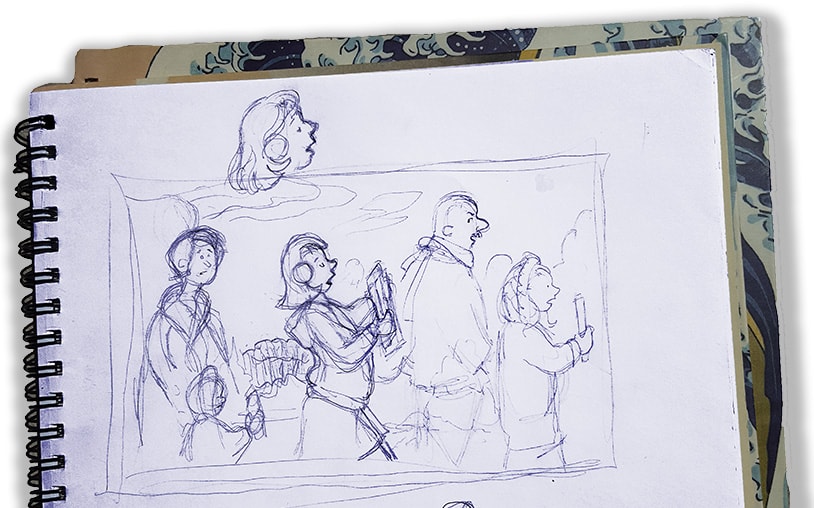 I liked this sketch of Abigail disturbing the procession, but I couldn’t find a good place to include it and it never made it into the book.