Just that morning, she had asked her mother, very politely, if there were going to be any extra prayers or anything that would make the service take longer than usual. Abigail had noticed, in a very scientific way, that her ability to stay out of trouble had a lot to do with the service being as short as possible. And so, very politely, she had asked about it as they were driving to church.

Abigail was surprised. “What?” she asked innocently.

Abigail’s brother Mark answered her from the front seat. “You ask that every Sunday, Abby.”

I feel your pain, Abigail. When I was going to church as a kid, I felt like church services went on for hours. As an adult looking back, I realize that these Protestant Sunday services probably only lasted 45 minutes at most. But it didn’t feel that way. I would try doodling, whispering with my sister (until we got a look from Mom), making up stories about everything in church … and it still felt like it took a year off my young life to get through a Sunday service. So I can only imagine how it feels sometimes to children who grow up Orthodox, where an average service lasts more than an hour.

And of course, Abigail has bigger problem than she quite realizes. She’s in church on the first Sunday of Lent — this is called the Sunday of Orthodoxy, and there is, in fact, something extra in the service. There’s a procession — one of the Orthodox traditions where the entire church lines up behind the clergy and walk slowly around the church. And there are four more Sundays to go, before Lent changes to Holy Week which culminates in Pascha. Some of those weeks will have processions; most will have longer prayers than usual. And there are extra services during the week.

It all becomes second nature after a while. In Abigail’s case, her family only joined the Orthodox Church a few years ago, and of course, a 10-year-old isn’t necessarily going to get the hang of things that happen a year apart. But for children that grow up Orthodox, and for adult converts like me who have put in enough years, you do start to enter into the Church’s pacing and rhythm at this time of year.

Letting the Church reset your clock

It begins with the Sundays that lead up to Lent. They have certain Gospel readings and reflect certain themes. You begin to know when you hear the Gospel reading of Zacchaeus and the the parable of the Publican and the Pharisee that the countdown has started. And eventually, even if you’re slow to catch on, you realize that you’ll be hearing about zeal and dedication on Zacchaeus Sunday, and about humility on the Sunday of the Pharisee and the Publican. 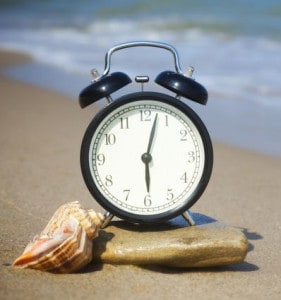 And so on. Once you’ve been in the Orthodox Church for a few years, you know the themes of the Sundays in Lent without even having to think about them very much. And then, at the end of that countdown, Lent begins on Forgiveness Sunday. And a new countdown starts — the Sundays on our Lenten journey.

I’ll have more to say about those Sundays as we get to them. But for now, I wanted to think more about the concept of “Lenten time.” The special Sundays with their themes, the extra services and longer prayers … naturally, they have a way of resetting our clock from where it usually is. We give this portion of the year to the Church, and we are led away from the world’s pressing demands and emphasis on superficial things. All of this is by design. At times like this the Church shows its age, it seems to me. You don’t come up with a plan that clever in just a few generations — it takes centuries to work out.

But there is also an aspect of it that is not engineered by us. There really is just something about the time of Lent. I have found that things tend to come together in my life — for better or for worse — during this church season. Most of job changes I have had happened during Lent; I prepared for my wedding during Lent; my father and father-in-law passed away during Lent. Things tend to come to a boil, and around the time of Pascha, they are resolved one way or another. And other Orthodox friends have told me the same thing.

So when I thought about the journey I had in mind for Abigail, and the way that matters of faith would become real to her in ways they never had before, I couldn’t think of any other time that it would have happened. It seemed like the most natural thing in the world. Because Abigail has been spending time in church — as we all sometimes do — without quite listening to what is going on, without quite letting it sink in. But as the days of Lent unfold, she finds that life and church are connecting and that there are lessons to be learned.

God willing, we all find that to be true as we undertake the journey of Lent.